The Swiss medtech industry has been leading GDP performance since 2010 and showing constant annual sales growth of around six percent. The 2016 Swiss Medtech Industry (SMTI) Sector Study sheds light on the industry, its strengths and its challenges. The report reveals some opportunities and challenges for start-ups, too.

Switzerland continues to showcase a strong medtech industry. The sector generated sales of 14.1 billion Swiss francs in 2015 – representing 2.2% of the entire gross domestic product (GDP), and an increase of CHF 0.8 billion over 2014. Since 2010, the SMTI has shown a constant increase in turnover of around six percent per year; well above the average GDP growth. In 2015, the industry was comprised of approximately 1,350 manufacturers, suppliers, service providers, and trade and distribution companies. They employed 54,500 individuals: 1,500 more than in 2014 and an increase of 2.8%. At the same time, labour productivity reached approximately CHF 260,000 per employee. These are results of the 2016 Swiss Medtech Industry (SMTI) Sector Study which is based on data derived from a survey of 350 companies. The study is published by SWISS MEDTECH (Medical Cluster and FASMED), together with the Helbling Group. 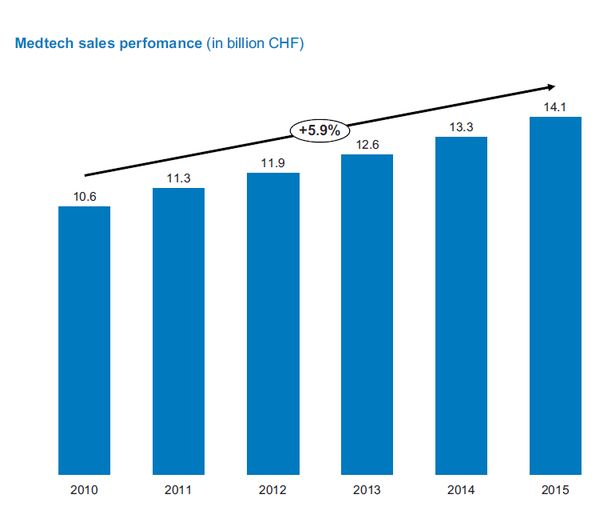 Exports overall stable, with a decline to the EU
With a volume of CHF 10.6 billion in 2015, exports remained constant despite the strong Swiss franc; actually increasing in the top destinations of the USA (by CHF 2.6) and Germany (by CHF 2.2 billion). By contrast, exports to the EU have decreased in value by about 15% since 2010. The negative EUR / CHF exchange rate reduced the demand and value of exports to EU countries, especially in the crisis-stricken countries of France, Italy, and Spain. At CHF 5.6 billion, the Swiss medtech industry is responsible for approximately one-sixth of Switzerland’s trade surplus.

Positive growth forecast for Switzerland
The industry believes in its potential and is looking positively towards the future. Survey respondents expect an increase in average sales of 8.6% for 2016, and 7.5% for 2017 – with the USA, South America, China, and Iran listed as particularly attractive markets.

Good news for start-ups
Depending on the size and age of the company, Swiss medtech manufacturers spend up to 30% of their annual turnover (suppliers around 13%) on R&D; with micro enterprises investing the most proportionally. New products are mainly developed in in-house programmes and partnerships, particularly with universities. Large companies supplement internal development through the purchase of ideas, prototypes, and finished products. The medtech industry also cites digitalisation as a further major driver of product innovation. Nine out of ten companies see significant opportunities in this trend, and just under half of the respondents acknowledge its major influence on current business models.

Innovation is getting more and more important. About 80% of Swiss medtech companies want to strengthen product innovation. This could bring new opportunities to start-ups. Although internal development and cooperation with universities are the most important sources of innovation large companies occasionally supplement internal development through the purchase of ideas, prototypes, finished products, and companies.

Red tape as huge challenge
One of the most important challenge of medtech companies are difficulties to manage the increasingly complex and growing number of regulatory requirements (ex. for the certification of new products) which produce a flood of documentation and inhibit innovation.

But there are more hurdles to overcome, for example, in connection with publicly funded projects with research partners. The time and effort needed for the application process is particularly criticised by medtech companies. The paperwork requirements are difficult to fulfil; especially for small and medium enterprises (SMEs) and start-ups.

Protectionist bureaucracy in the various countries is often experienced as differing requirements regarding product approvals. Compared to the relatively simple entry into European markets, access to the USA, Canada, Brazil, Russia, China, and (even more so) Japan is reported to be more difficult due to the extensive regulatory obligations.

Uncertainties threaten the strengths of the workplace
At the moment, the industry still benefits from the advantages of the domestic workplace, but its attractiveness is being increasingly challenged by other leading global medtech locations. The strong Swiss franc, the implementation of the corporate tax reform and the mass immigration initiative – and a subsequent shortage of skilled workers – are the main sources of uncertainty for the country’s CEOs. It is important to improve basic marketplace conditions in order to preserve international competitiveness and the innovative power of this industry, to prevent an exodus of production and research to foreign countries, and strengthen the domestic market again.

The 2016 Swiss Medtech Industry (SMTI) Sector Study can be downloaded for free from the website of the Medical Cluster.