05.2.2021 – EPFL startups raised CHF 293 million in 2020 – the highest they’ve achieved so far. Four of the young firms, including Kandou and Sophia Genetics, brought in over CHF 20 million each. The pipeline of new businesses also looks solid, as 25 new EPFL spin-offs were launched last year.

The pandemic-related uncertainty doesn’t seem to have dampened investor appetite or the determination of fresh entrepreneurs. EPFL startups had an excellent year in 2020 when it came to fundraising – they attracted a record CHF 293 million, and four of them raised over CHF 20 million each. What’s more, 21 startups completed their first fundraising round with proceeds of CHF 1–5 million. Also in 2020, 25 new EPFL spin-offs were created, which is close to the previous year’s figure. In addition, 34 business plans are in the works by EPFL researchers who have already received first funding. André Catana, the head of EPFL’s startup unit, says: “The startup world is a unique microcosm where the payoff is long term. And it held up well in 2020 despite the economic fallout from the pandemic, although we did see a decline in the CHF 5–20 million funding range.”

The CHF 293 million – which rises to CHF 351 million if the total includes companies that are based on campus but not direct spin-offs of the School – was collected by around 30 young businesses, including four that brought in over CHF 20 million each. These four include Kandou, a maker of high-speed data transfer systems that raised CHF 32 million on top of an already successful round in 2019, and Sophia Genetics, a fast-growing company that develops data-driven medicine technology and that signed up CHF 100 million at the end of the year – the most of any Swiss business in 2020. Other EPFL startups raised a hefty CHF 5–25 million each, such as Lightbend, Lunaphore, CREAL and Insolight. Clearspace also deserves special mention, as it won a CHF 93 million contract from the European Space Agency to conduct further development work on its space debris removal system.

The rest of the CHF 293 million went to the 21 firms that carried out their first fundraising round in 2020, bringing in CHF 1–5 million each. This underscores investors’ confidence in and appetite for deeptech startups, which could require many years before the technology they develop in a lab is turned into a market-launched product. “This funding comes in when the businesses have just been spun off, and provides a solid foundation for them to grow and attract more investors,” says Catana. 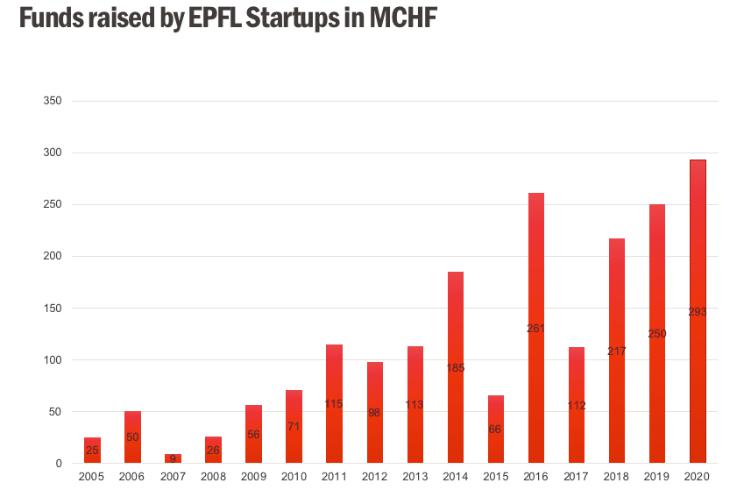 A total of 410 startups have come out of EPFL labs and accelerators in the past 50-odd years. Many of them received assistance from the various programs run by the School’s startup unit within the Vice Presidency for Innovation. This assistance includes not just financing to help the engineers reduce risk, accelerate their path to market and build teams but also advice, training, networking opportunities and forums for sharing their experience. The goal is to quickly teach them the ins-and-outs of starting a business and give them a boost in getting their ideas off the ground. 25 new EPFL spin-offs were created in 2020, down slightly from the previous year (27) but not far from the record set in 2018 (29). In addition, with 34 new business ideas being incubated at EPFL, the startup future looks bright. 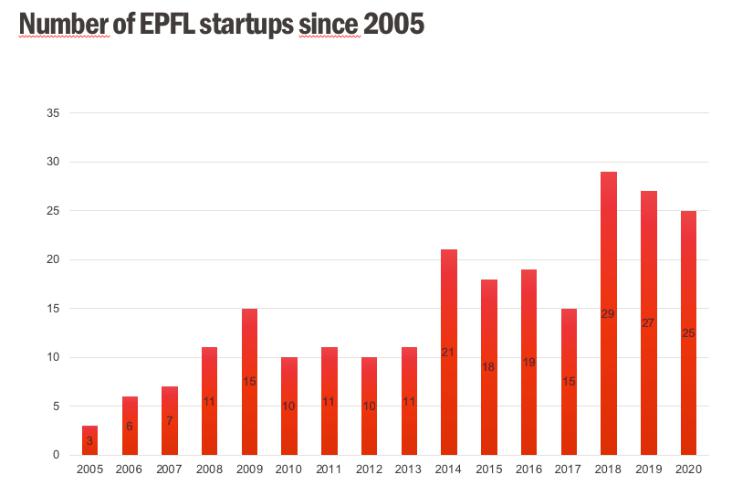 A higher number of female entrepreneurs

A record number of EPFL women started their own businesses in 2020, continuing the positive trend of the past three years. Over a third of EPFL startups created in 2020 had at least one female founder. This trend is also reflected in the many startup awards that women have won recently. For example, Depoly and Oxyle (from ETH Zurich) won the >>venture>> startup competition in 2019 and 2020, respectively, and Xsensio won a 2020 CES Innovation Award at the CES trade show in Las Vegas.

Major technological advancements have been made in critical areas such as sustainability, the environment, energy and social responsibility. Nearly a third of the EPFL spin-offs created in 2020 (seven of the 25) are developing solutions to address these global challenges. Examples include DePoly and Plastogaz, which have designed innovative plastic recycling systems; Comppair and Inergio, which have invented new solutions for materials and clean fuel cells; Sohhytec, which is exploring green-energy sources; and Urbio, which has developed software to support more sustainable urban planning.